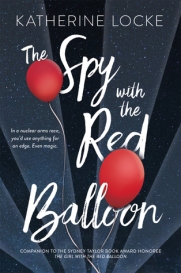 In a nuclear arms race, you’d use anything for an edge. Even magic.

Ilse and Wolf Klein bear many secrets. Genius Ilse is unsure if her parents will ever accept her love of physics. Her brother Wolf strives for a quiet life, though he worries that there’s no place in the world for people like him. But their deepest secret lies within their blood: with it, they can work magic.

Blackmailed into service during World War II, Ilse lends her magic to America’s newest weapon, the atom bomb, while Wolf goes behind enemy lines to sabotage Germany’s nuclear program. It’s a dangerous mission, but if Hitler were to create the bomb first, the results would be catastrophic.

When Wolf’s plane is shot down, his entire mission is thrown into jeopardy. Wolf needs Ilse’s help to develop the magic that will keep him alive, but with a spy afoot in Ilse’s laboratory, the secret letters she sends to Wolf begin to look treasonous. Can Ilse prove her loyalty—and find a way to help her brother—before their time runs out?

Loyalties and identities will be tested in this sweeping fantasy and a fast-paced thriller that bravely explores the tensions at the dawn of the nuclear age.

I received a copy of The Spy with the Red Balloon from Netgalley. I had heard a lot of good things about the first book in this companion series The Girl with the Red Balloon, which I have unfortunately not had the time to read yet. They are both historical fiction novels set at the time of World War II, that have magic in it, and Jewish main characters.

This book is #ownvoices for Jewish representation.

The story shows the brutality of Nazi Germany without describing every evil in detail. It focusses a lot more on what Ilse and Wolf are doing to help and how their life continues during the war.

Katherine Locke closes up the plot-hole of why not all of the victims were saved, if some people had magic, by explaining that the magic was tied to blood, and the magic users would need to have a lot more blood than they could give to save everyone.

The main characters are siblings, and they had such a lovely relationship. They took care of each other, even from afar. It was lovely to find out that both of them were queer, usually books seem to think that there can only be one queer person in a group of siblings, which is just ridiculous. I do head-canon Ilse as aro-spec, and I’d be interested to see if this is the case. They are also quite different from each other, and contrary to popular gender stereotypes, Ilse is a scientist, while Wolf becomes a spy.

One of the major scientist characters is a black female scientist. Through Stella’s story, the reader realises that even though Jewish and black people both experienced discrimination, the communities were affected in different ways. Stella also makes the reader aware that just because a place thinks that it is not racist, doesn’t mean that that is the reality.

I especially loved how the four scientists (who were all women) became closer to each other, and started to help each other out. It’s lovely to read about friendships between women, where the women are accepted for who they are.

The aroantagonistic phrase of “just friends” is used at least twice.

You should definitely get this book. It’s soooo good! I will definitely be reading The Girl with the Red Balloon soon. It was beautiful to read a book that focussed on sibling relationships and friendships between women.

Will you be reading The Spy with the Red Balloon? Have you read the first book?