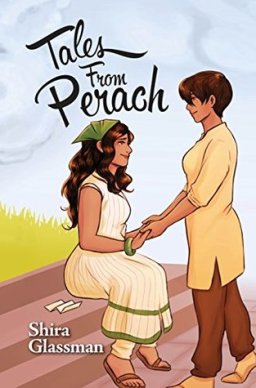 “Your Name is Love”
An energetic royal guard takes her artist wife on a scavenger hunt around the city so she can stop having artist’s block about the lesbian graphic novel she’s supposed to make for the queen.

“No Whining”
Trans woman Chef Yael dithers over whether to switch wine sellers, at the urging of her husband Aaron, when her regular vendor is incompetent but the delivery girl is a trusted ally.

“Every Us”
A prince with anxiety is comforted in the arms of his partner when he wakes up from a nightmare.

“Take Time to Stop and Eat the Roses”
A trans teenager and his girlfriend go on a midnight quest for flowers for her sister’s wedding.

“The Generous Princess”
A royal family with two moms and two dads puts their own special twist on celebrating Purim.

“Rivka in Port Saltspray”
Trapped in a seedy port town because an innkeeper is holding her shapeshifting dragon-horse hostage until she can pay all the charges he invented, nomadic warrior Rivka finally has a chance at some decent money when a wealthy but weak man hires her to rescue his fiancée. But she has to think on her feet when she learns there may be more at stake.

“Aviva and the Aliens”
On the night before the royal Passover seder, Aviva has to outsmart the aliens who abducted her to cook for them because they had grown sick of their spaceship’s food replicators. Will she get home before Queen Shulamit wakes up and panics from her absence?

I’ve been on the look out for stories that feature aromantic and_or asexual-spectrum characters, which is why I decided to buy Tales from Perach. It also gave me a great excuse to finally indulge in Shira Glassman’s writing, as I’d been meaning to do so for months. Two birds with one stone!

This is actually Book 4.5 of the Mangoverse series, but I read it before reading any other Mangoverse stories.

The bisexual and Jewish representation is #ownvoices.

What I most enjoyed about this collection was that each story had different main characters, so I feel like I was getting a lot of different, personal introductions to the different characters. After reading each story, I wanted to know about about the personal story of each character.

All of the characters are so cute and the stories are just amazingly adorable. It was such a treat to read this book every evening for a few days, and it was my daily highlight for those days.

The magical elements were strewn quietly into the story, and it took me some time to realise that it actually had fantasy aspects. It was written so simply that it just belonged to the story, and I loved that.

I was especially in love with the first story, as I love the idea of scavenger hunts with clues. The clues were all written very lyrically and were lovely descriptions of daily life. The scavenger hunt inspires an intriguing story idea in one of the characters – I SO WANT TO READ IT!

If you’re looking for the story with the aroace character, you can go straight to the story Rivka in Port Saltspray.

Tales from Perach is a short story collection with most adorable and softest characters ever. It’s so cute to read and I’m very sad that I won’t have another first time of reading them. However, I’m also excited because now I cannot wait to read her other books. As I stated above this is Book 4.5 of the Mangoverse series actually, but it works very well as a standalone!

Have you read Tales from Perach or other books from the Mangoverse series? How did you like them? Do you have a favourite character?

One thought on “Review: Tales from Perach – Shira Glassman” 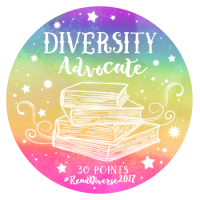